Gulf Harbors Yacht Club welcomes all who would like to meet new friends, enjoy the outstanding view, partake in many different social events, support the community, and enjoy the best food and drinks in the area.

On March 15, 1965, the Officers and Board of Directors of the Floramar Cruise Club, Inc. adopted a resolution to amend the Articles of Incorporation, changing the Club’s name to Gulf Harbors Yacht Club, Inc. The new organization received its charter on April 27, 1965 and was registered with Lloyds Registry on May 5, 1965.

The Club was commissioned on June 19, 1965 with Harry Cadenhead serving as its first commodore. The Club occupied a residential type building at #16 Floramar Terrace owned by the Lindrick Corp., a subsidiary of the Henry Crown & Co., Chicago, and developers of Gulf Harbors, from 1965 to 1973. Rent was $15.00 per month plus utilities. This building was demolished in 1973 to make way for construction of the Sea Castle condominiums.

Club meetings were held in the auditorium of Clearwater Federal Savings & Loan Assn. for a short time. Then meetings and parties took place in the Gulf Harbors Civic Association Building until 1978. In 1972, the Lindrick Corp. offered to donate a strip of land on the North Channel in the present Gulf Harbors Beach Club Estates area.

This offer was withdrawn early in 1975, and on April 7, 1975, the company gave the Club a letter of intent to conclude our final location on the North Channel at the west end of Marine Parkway in the Gulf Harbors Woodlands Community. At a regular meeting on May 10, 1976, the membership authorized the building committee, headed by Rear Commodore Harold R. Haney, to proceed with plans for the construction of a clubhouse on the new site. With the help of many officers and members, the building was completed and commissioned on February 12, 1978. 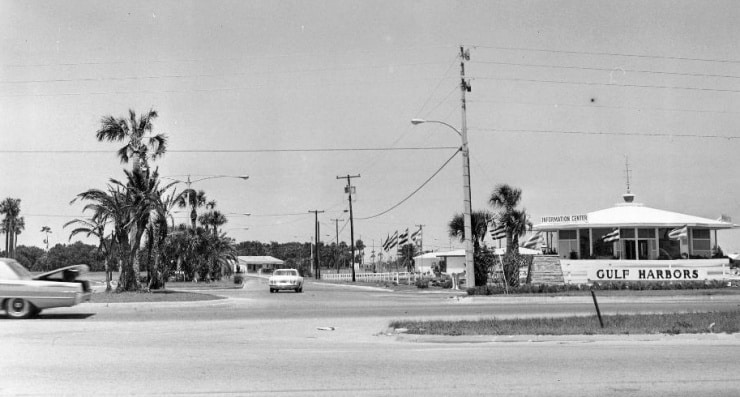 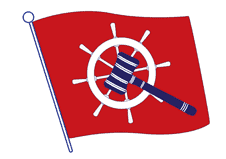 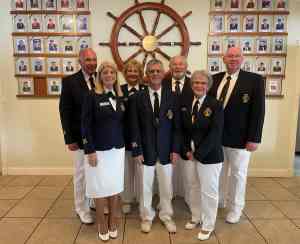 The Gulf Harbors Yacht Club offers reciprocity to all International Order of the Blue Gavel (IOBG) members with a valid club membership card. The IOBG is an international organization made up of Past Commodores of qualified yacht clubs. The mission is to recognize Past Commodores of the international yachting community and to unite them in order to promote the highest ideals of yachting and preserve its customs and traditions through social, educational and humanitarian programs.

We meet locally and nationally in the true spirit of camaraderie as Past Commodores. We are governed by local Chapters, Regional Districts and the International Board of Directors. Each District is represented by a District Director. All of Florida is District 8 where the current Director is Past Commodore Karen Shea from our GHYC. There are currently 207 members in District 8 and 20 Chapters. For more information on our District 8 visit IOBG District 8 or for International visit International Order of the Blue Gavel.

Our 2021 GHC Chapter board President is President Ed Grillo, Vice President David Hook, Secretary Tony Majka and Treasurer Karen Shea. Our GHYC IOBG was chartered on October 10, 1982. Since that time, we have had three of District 8 from GHYC, P/C John Snow 1990,  P/C John Button 2001 and P/C Joe King 2005. P/C John Button continued on as the District 8 Director in 2002 and 2003 and the South East Vice President in 2004. P/C Karen Shea has been the District 8 Director from 2016-2021 and the South East Vice President from 2018-2021 which includes IOBG chapters from the states of Florida, South and North Carolina, Alabama, Georgia and Tennessee. Kathryn Hockenberry has been the District 8 Secretary/Treasurer in 2020-2021. The GHYC Chapter (10 members) conducts monthly scheduled evening meetings (except June-August).

The GHYC IOBG Chapter is responsible for the annual Change of Watch, Member of the Year/Spring Social and the Commodore’s Ball which includes organizing the event. At these three events, we always explain the mission of the IOBG including the formal white uniform and the summer or winter uniform the IOBG members wear. In addition we put on or assist with other events like a Pig Roast, Fish Fry, Spaghetti Feast, Children’s Christmas Party, Memorials and Veteran’s Day.

Our primary mission is to ensure that our Yacht Club customs and traditions are preserved for generations to come.